Yesterday will be remembered as one of the most stressful days of my life. We transported our embryos to our new fertility clinic. We had our future babies’ lives in our hands and I was terrified of anything going wrong. We had so much driving to do and we needed all of our angels on our side protecting us on the road and getting those embabies safely from one location to another. It never left my mind that we were carrying our future in that tank. Everything we’d put our heart, soul, tears, hopes, dreams…and every last dollar was in that tank.

February 2017 was our last embryo transfer which was unsuccessful and from there I couldn’t move forward to try again…I got stuck in exhaustion and grief. I focused my energy at work and making a job change and also prioritized my life around health and wellness. I ended up taking a 7-week sabbatical from work (more about that in another post as there was a lot of fun stuff to report) and spent a lot of time exercising, meal planning and cooking. Weight loss was my first step to even trying to do another FET and I managed to lose 20 pounds with the help of Whole 30 and doing HIIT workouts and many, many hours of dog walks.   The dog had a great summer!

By August I started thinking about making a plan to try again. I reached out to my clinic to address our contract, which had ended and I was hoping for a new agreement or one last extension or some kind of negotiation…but that was not in the cards. We had already extended it several times and we finally hit the end of it. This meant we were back to spending out of pocket (queue the panic). I started thinking about setting up a consultation with my doctor and I just couldn’t do it. The realization that we were back to out of pocket spending broke me down and I was once again an emotional wreck. The thought of walking back into the clinic where I had seen our second and third pregnancies suddenly end with no heartbeats and received the news of negative pregnancy test results after 7 other FETs, gave me so much anxiety, I just couldn’t do it. I knew going back there was no longer an option for me. There was just too much trauma and loss associated with that place.

After a week of thinking it over, I knew what was next. We’d go to the new clinic we had sought out for second opinions last summer on our recurrent pregnancy losses. And that’s what brought us to our little adventure of transporting our embryos across the bay area.

This journey took 7 hours of driving. Now, there is the option of hiring a company to do this kind of work…but wow is it expensive. Not only did I want to save as much money as possible, but I couldn’t bear the thought of someone else being responsible for my embryos. My husband and I both took the day off of work and drove an hour and an half to the tank rental company. Here’s how the tank works…there’s liquid nitrogen in the tank and a tank lid that floats on top to let the gases out. If the tank were to fall over and the liquid nitrogen were to leak out, you’d lose everything. (queue clutching the tank with white knuckled death grip once we had our embryos). We then drove north about an hour and a half to pick up our embryos. I ended up running into my doctor there, we gave each other a big hug and I cried as he wished us the best and said he was thinking of us and I tried thanking him through my tears before walking out of there one last time. We had a picnic lunch in the car with the tank safely between my legs, then drove another hour or so to our new clinic. I was so relieved to make it there safely. Our little embryos had their first big outdoor adventure! We then had about an hour and a half drive home and we made it safe and sound. 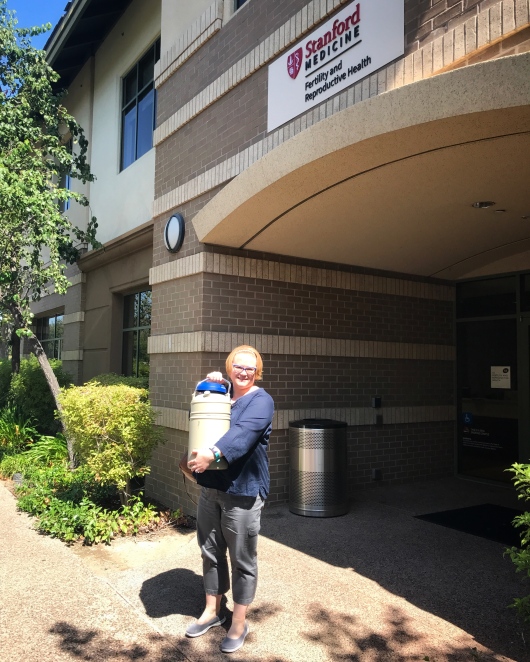 Next steps…I did a mock cycle over the past few weeks and had an endometrial biopsy on Wednesday to do the ERA (decided to go for it considering the number of failures we’ve had). We’ll be moving into an FET cycle soon as we anticipate the results from that assay.

2 thoughts on “Adventure Day for the Embabies”

Simple Yet Impactful Ways to Practice Self Care

Trusting in God’s plan while walking through early and late loss in pregnancy (including stillbirth), pregnancy after loss and raising children following loss.

The REAL Story of Infertility

the stories and adventures of our little family: full of love and loss.

Nobody has to go through this alone

My experience of recurrent miscarriage, reproductive immunology and other infertility stuff

I like my cameras old, my shoes comfortable, and my whiskey neat.

This is a place for me to document my experiences

Hope + Encouragement in the Waiting

Grew in My Heart - Adoption

This is an adoption blog about the ins and outs to help others understand the process, through our experience.

life after the heartbreaking choice to terminate a much wanted pregnancy

Our journey with Infertility

The highs and lows of a child psychologist dealing with infertility.

A journey of love, heartbeats and hope

LittleJillyBean
then i look up at the sky...

coffee, wine, and infertility. just a little blog about my life

Sweeping Up the Broken Pieces

On Surviving Multiple Pregnancy Losses and the Joy of a Rainbow

A journey through infertility & into motherhood

hope in the adventures of infertility, adoption and life

featuring some thoughts from me

MISS.CONCEPTION COACH
The Owl and the Empty Nest

A journey through infertility, life with twins, and other random thoughts.